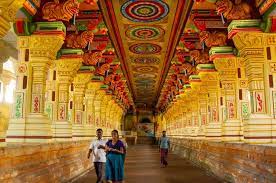 RAMESHWARAM TEMPLE Located in the centre of town, Ramanathaswamy Temple is a famous Hindu temple dedicated to the god Shiva. The temple is one of the 12 Jyotirlinga shrines, where Shiva is worshipped in the form of a Jyotirlinga meaning "pillar of light". ... It is one of the 275 Paadal Petra Sthalams, where the three of the most revered Nayanars (Saivite saints), Appar, Sundarar and Tirugnana Sambandar, have glorified the temple with their songs. The temple was expanded during the 12th century by Pandya Dynasty, and its principal shrines sanctum were renovated by Jeyaveera Cinkaiariyan and his successor Gunaveera Cinkaiariyan of the Jaffna kingdom. The temple has the longest corridor among all Hindu temples in India.[1] The temple is located in Rameswaram considered a holy pilgrimage site for Shaivites, Vaishnavites and Smarthas. The presiding deity, the Lingam of Ramanathaswamy (Shiva), was established and worshiped by Rama before crossing his bridge to Lanka. The temple has the longest corridor among all Hindu temples in India. The breadth of these columned corridors varies from 17 to 21 feet with a height of 25 feet. “If it were proposed one Temple which should exhibit all the beauties of the Dravidian style in their greatest perfection and at the same time exemplify all its characteristic defects of design, the choice would fall upon that at Rameswaram. In no other temple has the same amount of patient industry been exhibited as here and in none. Unfortunately has the labor been so thrown away, for want of design appropriate to its display .While the temple at tanjore produces an effect greater than its due to it’s mass or detail, this one with double its dimensions and ten times elaboration, produces no effect externally and internally can only be seen in detail, so that the parts hardly in any instance aid one another in producing the effect aimed at …” – Fergusson – History of Indian Architecture Ramanatha Swamy Temple is the main Temple of the Rameswaram Island, thousands of pilgrims and tourists visits Ramanatha Swamy temple every day for its sacredness and its architectural beauty. This Temple is considered as a holy pilgrimage place among three important Indian religious sects. • shaivism (those who worship lord Shiva) • vaishnavism (those who worship lord Vishnu) and • Smarthism (sect of Brahmins those who follow smrithis as authorized texts, and worship all gods as brahman, they follow Adhvaidha principle) It is believed that the Shiva – Linga in this shrine was installed by lord Ram in Thretha yuga (1.2 million years ago).