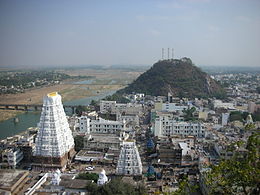 Srikalahasti Temple is located in the town of Srikalahasti, in the state of Andhra Pradesh, India. It is one of the most famous Shiva temples in South India, and is said to be the site where Kannappa was ready to offer both his eyes to cover blood flowing from the Siva linga before the Siva stopped him and granted him moksha. Srikalahasti temple, situated 36 km away from Tirupati is famous for its Vayu linga, one of the Panchabhoota Sthalams, representing wind. The temple is also regarded as Rahu-Ketu kshetra and Dakshina Kailasam. The inner temple was constructed around 5th century and the outer temple was constructed in the 11th century by the Rajendra Chola I, later Chola kings and the Vijayanagara kings. Shiva in his aspect as Vayu is worshiped as Kalahasteeswara. The temple follows Saivite tradition. Maha Shivaratri is the most important festival when lakhs of devotees offer prayers to seek the blessings of the Lord. Mahasivaratri Brahmotsavams are celebrated in par with Maha Shivaratri for 13 days during which the Utsava murtis of Siva and Parvati will be taken on Vahanams in a procession around the temple streets.