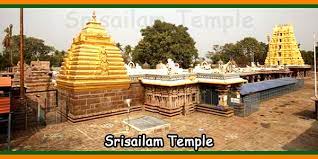 Mallikarjuna Temple (also simply known as Srisailam Temple), is a Hindu temple dedicated to the deity Shiva, located at Srisailam in Indian state of Andhra Pradesh.It is significant to the Hindu sects of both Shaivam as this temple is referred to as one of the twelve Jyothirlingas of Lord Shiva. Shiva is worshiped as Mallikarjuna, and is represented by the lingam. When Shiva and Parvati decided to find suitable brides for their sons. Shiva got Buddhi (intellect), Siddhi (spiritual power), and Riddhi (prosperity) married to Ganesha. Kartikeya on his return was enraged and went away to stay alone on Mount Kraunja in the name of Kumarabrahmachari. On seeing his father coming over to pacify him, he tried to move to another place, but on the request of the Devas, stayed close by. The place where Shiva and Parvati stayed came to be known as Shrishailam. As per Hindu legend, the presiding deity in the form of Linga (an iconic form of Shiva) was worshipped with jasmine (locally called in Telugu as Mallika), leading to the name of presiding deity as Mallikarjuna. Mahashivratri is the main festival celebrated at Srisailam Mallikarjuna Swamy temple. Lord Shiva in this temple is referred to as one of the twelve Jyotirlingas. This temple is classified as one of the Paadal Petra Sthalam. On the way to the main temple is located Shikreshwar temple. It is said that by having darshan in the temple one does not get rebirth. Krishna River here is called Patal Ganga. One has to go down 852 stairs to reach the river. The Shiva Linga is bathed with the water of this river.