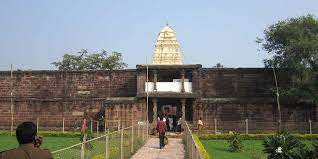 The Sri Chalukya Kumararama Sri Bhimeswaraswamy vari temple is a temple in Samalkota. The presiding deity at this temple is Shiva, known as Kumara Bhimeswara. The most important festival that is celebrated in this temple is Maha Sivarathri. The temple is historically prominent, as it was built by Chalukyas who reigned over this location. Construction of the temple started in 892 and completed around 922. It is similar to the temple in Draksharamam, but is also unique, such as the linga being white. The temple still stands strong, and it was made a National Heritage Site. It resembles a twin of Draksharam, with two staired Mandapa, and notable that it is in excellent condition, without any cracks. Though the temple is not in a populated place, people do visit there. The linga is a limestone, 14 feet (4.3 m) high. The temple was built in Dravidian style, by the King Chalukya Bhima. Hence, the god name is Bhimeswara (between 892-922CE). The Kakatiya rulers (in the period 1340-1466CE) have added and renovated the temple pillars with very fine sharp finishes. The work of Chalukyas and Kakatiyas is very easily distinguished, by the well-decorated and polished pillars in the temple to the rest of the temple, both new and old. The construction of this temple is so solid that it has not changed much through all the years, when compared to the Draksharaam temple. Kala Bhairava is also of importance, and Balatripura sundari is the Goddess. Sasanas between 1147-1494 were scripted into pillars of the temple, which also have lists of gifts given, through the ages, for the temple. Recent excavations in the compound of the temple has yielded many figures dated back 1000 years are now present inside the temple. In Puranas it has been written that it is a Yogakshetram, which means, the person who has the "yogam" ("fated to have" or "opportunity given by god" or "boon") to visit, will visit the temple.