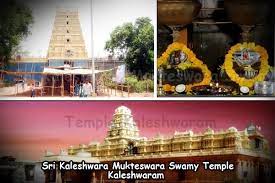 Kaleshwaram is a town lying on the border of Telangana and Maharashtra. The town is popularly known for its ancient and famous Kaleshwara Mukteshwara Swamy Temple. This is a revered temple is dedicated to the worship of the powerful Lord Shiva. The most iconic aspect in this ancient temple is the presence of two Lingams holding on to a single pedestal or the Panavattam. The temple gets its name Kaleshwara Mukteswara Swamy mandiram because of the duel presence of Lord Shiva or the Mukteshwara and the other is the Lord Yama or Kaleshwar. It is also believed that the Kaleshwara Mukteswara Swamy temple is one of the three temples of Lord Shiva of Trilinga Desham. All the three temples are considered as Jyotirlingas that ornament the three corners of Telugu Land. The other two temples constituting the Trilinga Desam are at the Draksharamam and Srisailam. The Jayashankar Bhupalpally temple boasts of several unique features, one of which is the hole in the Mukteshwara linga which can never be filled with water. The reason behind it is still a wonder. Many researchers have failed to provide any explanation for this. However, there are a few indications of a possible underground passage which goes all the way to the River Godavari which could provide a logical explanation. Another special attraction of this temple is the interesting sculpture of the fish idol. The temple is significant because of the two Shiva Lingas that are found on a single pedestal. These Linga are named Lord Shiva and Lord Yama. Collectively, they known as Kaleshwara Mukteswara Swamy. Kaleshwaram is one of three Shiva temples mentioned in Trilinga Desham, or "Land of Three Lingas. The temple is open from 4:00 a.m.-1:00 p.m. and 3:30-8:00 p.m. Access to Laksha Bilwapatri Pooja is by request to Dewasthanam officials at least one month in advance. Two types of prasadam are inside the temple: Pulihora (Tamarind rice) and Laddu (sweet). This place is very popular for after funeral events like kashi. People believe that this is second kashi in India.