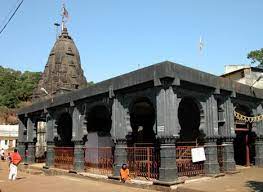 Bhimashankar Temple is a Jyotirlinga shrine located 50 km Khed taluka (alias Rajgurunagar), near Pune, in Maharashtra, India. It is located 127 km from Shivajinagar (in Pune) in the Ghat region of the Sahyadri Mountains. Bhīmāshankar is also the source of the river Bhima, which flows southeast and merges with the Krishna river near Raichur. The other Jyotirlinga shrines in Maharashtra are Trimbakeshwar near Nashik and Grishneshwar. As per the Shiv Mahapuran, once Brahma (the Hindu God for creation) and Vishnu (the Hindu God for protection) had an argument about creation. To test them, Shiva pierced the three worlds as a huge endless pillar of light, the jyotirlinga. Vishnu and Brahma split their ways to search downwards and upwards respectively to find the end of the light in either direction. Brahma lied that he found out where it ends, while Vishnu conceded defeat. Shiva appeared as the second pillar of light and cursed Brahma that He would have no place in ceremonies while Vishnu would be worshipped till the end of eternity. The jyotirlinga is the supreme partless reality, out of which Shiva partly appears. The jyotirlinga shrines, thus are places where Shiva appeared as a fiery column of light. Bhimashankar is an ancient shrine, one of the 12 Jyotirlingas of Shiva. Far away from the tumult of urban life, peeping through the white clouds, Bhimashankar can be termed a pilgrim's paradise. The dense forests surrounding the high ranges are an abode for rare species of flora and fauna. Situated at the extreme end of the Sahyadri Ranges, this place gives a wonderful view of the world around the local rivers and hill stations. Bhimashankar is the source of the Bhima River, which flows southeast and merges with the Krishna River. With endless stretches of virgin forests, lofty peaks that seem to reach out to the heavens, and the whispering waters of the Bhimā River, Bhimashankar is definitely one of God's choicest creations. It seems as if Lord Shiva is keeping a silent vigil over the majestic ranges of the Sahyadris. The serenity interrupted only by the silent murmuring of the cool breeze and the occasional chirping of birds, Bhimashankar is a trekker's delight and a traveller's sojourn. The Bhimashankar temple is a composite of old and new structures in the Nagara style of architecture. It shows the excellency of the skills achieved by ancient Vishwakarma sculptors. It is a modest yet graceful temple and it dates back to the 13th century while the sabhamandap was built in the 18th century by Nana Phadnavis. The shikhara was built by Nana Phadnavis. The great Maratha ruler Chattrapati Shivaji Maharaj is said to have made endowments to this temple to facilitate worship services. As with other Shiva temples in this area, the sanctum is at a lower level. The best time to visit is between August and February. Though any time of the year is good to visit Bhimashankar, it is better to avoid visiting it during summer. Similarly during monsoon, unless one likes trekking, it is better to avoid a visit. That leaves the best period to seven months between August and February. Three worship services are offered every day. Mahashivratri is a season of great festivity