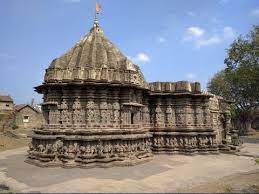 Kopeshwara Temple is at Khidrapur, Kolhapur district, Maharashtra. It is at the border of Maharashtra and Karnataka.It is also accessible from Sangli as well. It was built in the 12th century by Shilahara king Gandaraditya between 1109 and 1178 CE. It is to the east of Kolhapur, ancient & artistic on the bank of the Krishna river.Even though Shilahars were Jain kings, they built and renovated various Hindu temples, thus depicting their respect and love for all religions. Kopeshwara means angry Shiva in Kannada . The temple is made up of black stone and the architecture of the temple resembles that of Konark of Puri and other traditional ancient south Indian temples. It was built by Shilahar King Gandaraditya, Vijayaditya and Bhoj-II between 1109 and 1178 AD. All the external pillars protruding out of the foundation of the temple have symbols of power and strength carved out on them. Symbols like a bull, a wild goat with curled horns, elephant etc. provide symbolic strength to the structure of the temple. They have justified the vision of the architect by sustaining the weight of this temple for ages. The divine trinity of Brahma, Vishnu and Mahesh guard the two sides and the back of the temple. Shiva being at the centre of all the three statues signifies that the temple has always been a Shiva temple. The most intriguing part of the temple is the second unit. It is a dome that has an open finished circle on the top of it. There are two possible theories that are floating around regarding the openness of the dome from the top. The first one proposes that the temple was to be made in one single night and this was the only part of the temple that could not be made that night. It's hard to believe and rely on this theory as the dome of the temple never appears to be a half cooked structure. In fact we can observe fineness and symmetry around the open part of the dome. This gives more strength and conviction to the second theory, which proposes that this open dome was meant to be the doors or channels to heaven. The worships (Yagya) performed under the dome and the holy smoke along with holy recitations reach directly to the Gods residing in Heavens. This part of the temple has most of the sculptures depicting common man (mostly from Vaishya community) worshiping and other astonishing stone carved art forms on pillars. The transition from the open dome to the third unit is welcomed by Yakshas (Angels) on both sides of the door. The third unit has different sculptures on the pillars of the temple. The pillars have stories of the ancient Panchtantra, Ramayana and depiction of different reincarnations like Narasimha Avatar with Bhakt Prahlad, Kali Devi, Hanuman and Gautam Buddha etc. The depiction of stories of Panchatantra and carved statue of Gautama Buddha are the most surprising and enigmatic parts of this unit. Faces of most of the statues have been mutilated. History says that this was done by Adil Shah the ruler of nearby Bijapur Kingdome. The temple is under the supervision of Archaeological Survey of India. The entire temple is divided into four parts Swargamandapa, Sabhamandapa,Antaral kaksha and Garbha gruha. The Swargamandapa has a vestibule with an open top. The sanctum is conical. The exterior has stunning carvings of deities and secular figures. Elephant statues sustain the weight of the temple at the base. In the interior we first see Vishnu (Dhopeshwar) & Shivaling facing north. But there is no Nandi who has separate Mandir. Separate Actor-Pendal also called as swarga mandap, hall, old pillars, carvings of gods & male and femnale artists in various poses are attractive. The ceiling is semi-circular with rnatchless engravings. On the out side, complete 'Shivaleelamrit' is carved. The Kopeshwar, Ancient & artistic temple situated on the bank of Krishna is a fine example of ancient sculpture. It was built in 11-12 century by Shilahara. The ceiling is semi-circular with matchless engravings. Inside there is statue of Vishnu( Dhopeshwar) and Shivling " Kopeshwar " facing north. There is no nandi who has separate Mandir. Separate Actor-Pendal, hall, old pillars, carvings of gods & male-female artists in various poses are attractive. This is the only Shiva temple in India with idol of Vishnu.