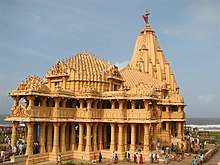 The Somnath temple (also known as the Deo Patan) located in Veraval in Saurashtra on the western coast of Gujarat, India is believed to be the first among the twelve Jyotirlinga shrines of Shiva. It is an important pilgrimage and tourist spot of Gujarat. Reconstructed several times in the past after repeated destruction by several Muslim invaders and rulers, the present mandir was reconstructed in the Chaulukya style of Hindu temple architecture and completed in May 1951. The reconstruction was started under the orders of the Home Minister of India Vallabhbhai Patel and completed after his death. Presently the Prime Minister of India Narendra Modi is the chairman of Somnath Mandir trust. The temple is considered sacred due to the various legends connected to it. Somnath means "Lord of the Soma", an epithet of Lord Shiva. According to tradition, the Shivalinga in Somnath is one of the 12 jyotirlingas in India, where Shiva is believed to have appeared as a fiery column of light. The jyotirlingas are taken as the supreme, undivided reality out of which Shiva partly appears.