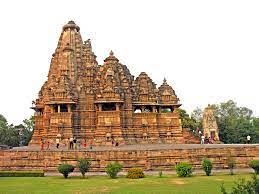 The Vishvanatha Temple is a Hindu temple in Madhya Pradesh, India. It is located among the western group of Khajuraho Monuments, a UNESCO World Heritage site. The temple is dedicated to Shiva, who is also known as "Vishvanatha" (IAST: Viśvanātha), meaning "Lord of the Universe". The temple is believed to have been commissioned by the Chandela king Dhanga, and was probably completed in 999 CE or 1002 CE. Its architectural style is similar to that of the older Lakshmana Temple and the newer Kandariya Mahadeva Temple. It features several sculptures of various deities, surasundaris (celestial maidens), couples making love, and mythical creatures. A dedicatory inscription, now affixed to the porch of the Vishvanatha temple, provides information about the construction of a Shiva temple by the Chandela king Dhanga. The original date of the inscription is read variously as 1056 VS (999 CE) or 1059 VS (1002 CE). The inscription mentions that Dhanga's descendant Jayavarman had it re-written in clear letters in 1173 VS. It states that Dhanga constructed a magnificent Shiva temple with two lingas (symbols of Shiva). One linga – Marakateshvara ("Emerald Lord") – was made of emerald. The other linga – Pramathanatha ("Lord of Pramathas or goblin-like spirits") – was made of stone. The inscription appears to have been issued after Dhanga's death: it states that after living for more than a hundred years, Dhanga attained moksha by abandoning his body in the waters of Ganga and Yamuna. Unlike some other Chandela temple inscriptions, it does not mention the Pratihara overlords of the Chandelas. This suggests that the Chandelas were no longer vassals of the Pratiharas by this time. The bit about the emerald linga (possibly an emerald-studded linga) also supports this theory. According to the Puranas, a jewel-studded linga is an appropriate donation to be made upon the fulfilment of a desire. This suggests that Dhanga built the temple after attaining a high political status as a sovereign. Based on this inscription, scholars believe that the temple was completed in 999 CE or 1002 CE. However, according to art historian Shobita Punja, the temple referred to in this record may or may not be the Vishvanatha temple. According to her, there is a possibility that Dhanga built two temples, one with a stone linga and another with an emerald linga. The main shrine is an example of the nagara style: it contains an entrance porch (ardha-mandapa), a small hall (mandapa), a large hall (maha -mandapa), a vestibule (antarala), and a sanctum (garbhagriha) with a roof tower (shikhara). All these are located on a base with several sculptures. The stairs leading from the base to the porch are flanked by lions on one side, and elephants on the other side. The rectangular plan of the main shrine measures 27.5 metres (90 ft) x 13.7 metres (45 ft). The sanctum has a stone linga; the emerald linga mentioned in the inscription is missing. The linga is surrounded by a passage for parikrama (circumambulation). The sanctum has balconies on three sides for light and ventilation. Sandstone is the main building material used in the structure.