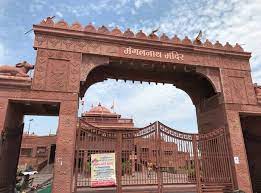 The Mangalnath Temple is a Hindu temple located in the Ujjain city of Madhya Pradesh. It is dedicated to Mahadeva, the guardian deity of the city. Located on the banks of the Shipra River, it is one of the most active temples in the city, visited by hundreds of devotees daily. It is regarded as the birthplace of Mars (mangala in Hindi), according to the Matsya Purana. Famous for a clear view of the planet and hence suitable for astronomical studies Located on the outskirts of the city, Mangalnath Temple is among the most important shrines on the tourist circuit. The presiding deity of the temple is Lord Shiva or Mahadeva, who is worshipped by devotees from far and wide. According to Matsya Purana, the Mangalnath Temple is considered to be the birthplace of Mars. It is said that during ancient times, the temple was one of the best places to get a clear view of Mars and a great spot for astronomical studies. Located on the banks of River Kshipra, the temple is associated with the belief that it will rid visitors of their dark energies and problems. From here, visitors can also get a picturesque and sweeping view of the holy Kshipra river.