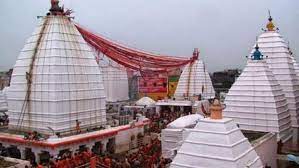 Vaidyanatha Jyotirlinga temple, also known as Baba Baidyanath dham and Baidyanath dham is one of the twelve Jyotirlingas, the most sacred abodes of Shiva. It is located in Deoghar in the Santhal Parganas division of the state of Jharkhand, India. It is a temple complex consisting of the main temple of Baba Baidyanath, where the Jyotirlinga is installed, and 21 other temples. According to Hindu beliefs, the demon king Ravana worshipped Shiva at the current site of the temple to get the boons that he later used to wreak havoc in the world. Ravana offered his ten heads one after another to Shiva as a sacrifice. Pleased with this, Shiva descended to cure Ravana who was injured. As he acted as a doctor, he is referred to as Vaidhya ("doctor"). From this aspect of Shiva, the temple derives its name. Kanwar Yatra is an annual pilgrimage of devotees of Shiva, known as Kānvarias or "Bhole" to Hindu pilgrimage places of Sultanganj in Bihar to fetch holy waters of Ganges River. Millions of participants gather sacred water from the Ganga and carry it across hundreds of miles to dispense as offerings in Baidyanath Temple in Jharkhand. The Maa Parvati temple is tied up with the main temple, with huge red sacred threads which is unique and worthy of reverence, showing the unity of Shiva and Shakti. According to the stories narrated in the Shiva Purana, the holy Baidyanath temple resembles the unity of souls and thus fits marriage for Hindus. On a normal day, the worshipping of Baidyanath Jyotirlingam begins at 4 AM. The temple doors open at this time. During 4:00am to 5:30 am, the Head priest worships with Shodashopachar. Locals also call it Sarkari Pooja. Then the devotees begin their worship of the Shivalinga. The most interesting tradition is that priests of the temple pour kuchcha Jal upon the lingam first, and later on, the pilgrims pour water and offer flowers and Bilva leaf, upon the lingam. The Puja rituals continue till 3.30 PM. After this, the temple doors are closed. In the evening at 6 PM the doors are opened again for devotees/ pilgrims and the process of worshipping begins again. At this time Shringar Puja takes place. The temple closes at 9:00 pm on a normal day, but during Holy Shravan month, the timings are extended. Unlike Somnath or Rameshwaram or Srisailam, here the devotees can get satisfaction by offering Abhishek themselves on Jyotirlinga. The pandas who perform different poojans for devotees are very important persons. The devotee can also buy Peda as prasad from Babadham. Peda is a local speciality of Deoghar. Babadham has a regular and well-maintained office to accept offerings and donations.