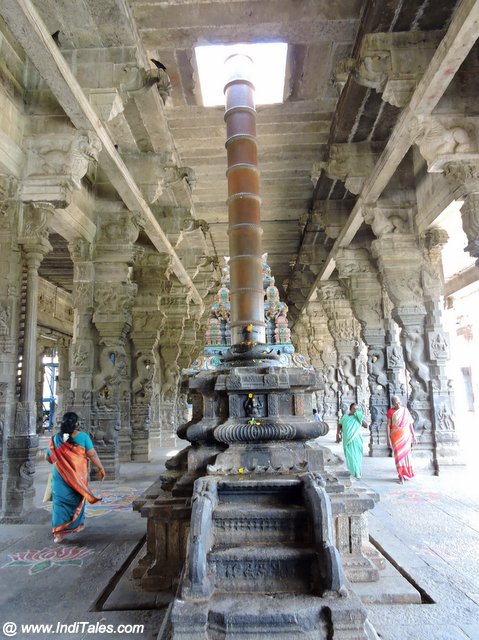 EKAMBARESHWAR KANCHIPURAM The Ekambareswarar Temple is one of the famous Hindu temples dedicated to Lord Shiva, located in Kanchipuram in the state of Tamil Nadu, India. Kanchipuram. It is one of the five major Shiva temples or Pancha Bootha Sthalams (each representing a natural element) representing the element – Earth. The other four temples in this category are Thiruvanaikaval Jambukeswara (water), Chidambaram Natarajar (ether), Thiruvannamalai Arunachaleswara (fire) and Kalahasti Nathar (wind). The temple covers an area of over 23 acres (93,000m2). Reaching a height of 59 meters, the temples Raja gopuram (the entrance tower to the temple) is one of the tallest in South India. One notable feature of the temple is the Aayiram Kaal Mandapam, or the “hallway with a thousand pillars”, which was built by the Vijayanagar Kings. The temples inner walls are decorated with an array of 1,008 Siva lingams. The campus is 25 acres with 5 prakarams (or courtyards) and has a thousand-pillared hall. Kampai Tirtha, the temple tank is believed to have an underground holy river. The fourth courtyard contains a small Ganesha temple and a pond. The third courtyard contains lot of smaller shrines. The sanctum sanctorum contains the lingam along with the image of Shiva. There is no separate shrine for Parvati within the complex as with other Shiva temples in Kanchipuram. A local belief is that Kamakshi Amman Temple is the consort for Ekambaranathar. There is a small shrine for Vishnu named Thiru Nilaaththingal Thundathan inside the temple complex. Vishnu is prayed as Vamana Murthy and the shrine is hailed by the Alvar saints as one of the 108 Divya Desams. The sthala-virutcham or temple tree is a 3,500-year-old mango tree whose branches are said to yield four different types of mangoes from its four branches. The presiding deity here is Ekambareswarar or Shiva, worshipped as the Prithivi Lingam. Lord Shiva in the temple is a swayambumurthi. The sand Shivalinga made by Mother Kamakshi adores the sanctum sanctorum. The hand symbol of Mother embracing the Lord is still visible on the Linga. A Somaskanda panel featuring Shiva, Parvati and Skanda adorns the rear of the main shrine, which has been held in worship for centuries together. Colorful festivals are being celebrated such as Ani Tirumanjanam(June-July), Adi Kritikai(July-Aug), Avani Moolam(Aug-Sep), Navaratri(Sep- October), Kartikai Deepam(Nov-Dec), Thai Poosam(Jan-Feb), Panguni Uthiram(Mar- Apr), Chitra Pournami(Apr-May) and Vaikashi Vishakam(May-June). The devotee crowd is also huge on new moon, full moon and pradosha days. Also celebrated in the temple are Deepavali, Tamil and English New Year days with special abisheks and pujas. Thousands come to worship Lord on these days.13 day Panguni Uthiram in March-April with colourful events with processions in Silver Rath, Silver Mavadi Servai and Gold Vrushab- the Nandhi vahan of Lord Shiva is the biggest festival of the temple drawing devotee crowd in lakhs.