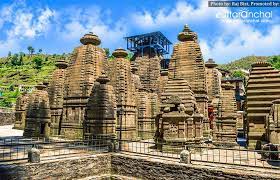 Jageshwar Temples, also referred to as Jageswar Temples or Jageshwar Valley Temples, are a group of 124 ancient Hindu temples dated between 7th and 14th century near Almora, in the Himalayan Indian state of Uttarakhand.The valley has a number of temple clusters such as the Dandeshwar and Jageshwar sites. Some locations have attracted construction of new temples through the 20th-century. Together these clusters over the valley consist of over 200 structural temples built from cut stone. Many are small, while a few are substantial. They predominantly illustrate North Indian Nagara style of architecture with a few exceptions that show South and Central Indian style designs, many are dedicated to god Shiva, while others in immediate vicinity are dedicated to god Vishnu, Shakti goddesses and Surya traditions of Hinduism. Jageshwar is a Hindu pilgrimage town and one of the Dhams (pilgrimage region) in the Shaivism tradition. The site is protected under Indian laws, and managed by the Archaeological Survey of India (ASI). It includes Dandeshwar Temple, Chandi-ka-Temple, Jageshwar Temple, Kuber Temple, Mritunjaya Temple, Nanda Devi or Nau Durga, Nava-grah temple, a Pyramidal shrine, and Surya Temple. The site celebrates the Jageshwar Monsoon Festival during the Hindu calendar month of Shravan (overlaps with July–August) and the annual Maha Shivratri Mela (Shivratri festival), which takes place in early spring. The Jageshwar group of temples are similar to some large historic cluster of Hindu temples found on the Indian subcontinent. For example, a similar cluster is seen near Bhubhaneswar, Odisha at the Lingaraja group of temples. Another large group of stone temples is illustrated at the Batesvar complex in Chambal valley of Madhya Pradesh. Almost all the small and large temples in the Jageshwar valley, states Chanchani, have a "simple square plan sanctums bounded by plain walls and tiered superstructures". The Jageshwar temple site attracts a few hundred pilgrims and visitors everyday. It remains a part of the Hindu sacred geography, particularly for the central Himalayan region. Many complete a part of the post-cremation last rites after the death of a loved one at the Jageshwar temple site. The temples are particularly popular in the late monsoon season. In other months, pilgrims typically combine their pilgrimage to Jageshwar Temples with those at Lake Mansarovar or Badrinath and Kedarnath, or other places in the Himalayas such as Gangotri. The site remains popular with Hindu monks and they continue to protect the site's sacrality.