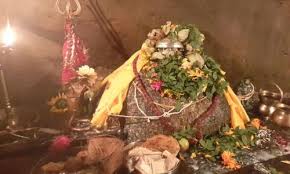 Strewn across the state of Uttarakhand are numerous temples dedicated to several deities of the Hindu pantheon. Located in the Garhwal region of the state are five such revered shrines where Lord Shiva is worshipped. Collectively known as Panch Kedar (panch in Hindi means five), these temples are Kedarnath, Madhmaheshwar, Tungnath, Rudranath, Kalpnath.According to mythology, there are several renditions behind the formations of these five sites. As per popular belief, during one of the ages described in the ancient Hindu scriptures, the Pandava princes (characters from the Hindu epic Mahabharata) were advised to worship Lord Shiva in Uttarakhand as penance for the bloodshed caused in the war as mentioned in the epic Mahabharata. The legend goes that Lord Shiva was hiding from the Pandavas by taking the form of a buffalo but was identified by Bhima, one of the five Pandava brothers. On being recognised, the deity disappeared and manifested himself in five different locations in the Himalayas. It is said the each of these sites is dedicated to a part of the Lord - Kedarnath (the hump of Lord Shiva), Madhmaheshwar (His belly button), Tungnath (His arms), Rudranath (His face), Kalpeshwar (His jata or hair). During the winter period when the temples are inaccessible due to snowfall, the sanctified symbolic Shiva idol of Kedarnath is worshipped at the Omkareshwar temple at Ukhimath, the representational idol of Tunganath is worshipped at Mokumath, the Rudranath symbolic image is brought to Gopeshwar, and the Madhyamaheshwar symbolic idol is venerated at Ukhimath. Kalpeshwar is the only temple of the sacred Panch Kedar that remains open throughout the year.