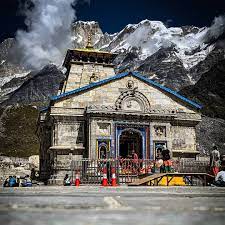 Standing magnificently at an altitude of 3,580mts and enveloped in the mighty Garhwal Himalayas, the Kedarnath Temple is one of the twelve Jyotirlingas of Lord Shiva. Kedarnath forms one of the four sites of the Chota Char Dham Pilgrimage. Dedicated to Lord Shiva, Kedarnath Temple is among the 275 temples of Paadal Petra Sthalams (the most powerful Shiva temples in the world) and is also the most important among the Panch Kedars. The temple is not directly accessible by road and has to be reached by a 22 kilometres (14 mi) uphill trek from Gaurikund. Pony and manchan service is available to reach the structure. According to Hindu legends, the temple was initially built by Pandavas, and is one of the twelve Jyotirlingas, the holiest Hindu shrines of Shiva. Pandavas were supposed to have pleased Shiva by doing penance in Kedarnath. The temple is one of the four major sites in India's Chota Char Dham pilgrimage of Northern Himalayas and is the first of the Panch Kedar pilgrimage sites.. This temple is the highest among the 12 Jyotirlingas. The temple, which is dedicated to Lord Shiva, is said to be more than 1,200 years old. It was built by Adi Shankaracharya and is among one of the 12 jyotirlingas in India. A visit to the Kedarnath temple is an integral part of the famous Char Dham Yatra in Uttarakhand. The temple of Kedarnath is always covered with snow and due to the bad weather of it the valves of the temple are closed for 6 months. Prior to shutting down the doors of the temple, priests take the vigilance and the rod down. After cleaning the temple complex in carrying the bar down, the lamp burns here. Summers from April to June are the best time to visit Kedarnath temple. These months are also the best time to visit Badrinath temple. Gangotri and Yamunotri lie at a higher altitude, so summer starts a little later there, almost at the end of April.