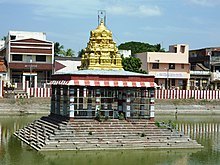 Kapaleeshwarar Temple is a Hindu temple dedicated to lord Shiva located in Mylapore, Chennai in the Indian state of Tamil Nadu. The form of Shiva's consort Parvati worshipped at this temple is called Karpagambal is from Tamil ("Goddess of the Wish-Yielding Tree"). The temple was built around the 7th century CE and is an example of Dravidian architecture. According to the Puranas, Shakti worshipped Shiva in the form of a peacock, giving the vernacular name Mylai (Mayilāi) to the area that developed around the temple - mayil is Tamil for "peacock". Shiva is worshiped as Kapaleeswarar, and is represented by the lingam. His consort Parvati is depicted as Karpagambal. The presiding deity is revered in the 7th century Tamil Saiva canonical work, the Tevaram, written by Tamil saint poets known as the Nayanars and classified as Paadal Petra Sthalam. The temple has numerous shrines, with those of Kapaleeswarar and Karpagambal being the most prominent. The temple complex houses many halls. The temple has six daily rituals at various times from 5:30 a.m. to 10 p.m., and four yearly festivals on its calendar. The Arubathimoovar festival celebrated during the Tamil month of Panguni as part of the is the most prominent festival in the temple. The temple is maintained and administered by the Hindu Religious and Charitable Endowments Department of the Government of Tamil Nadu The Kapaleeshwarar temple is of typical Dravidian architectural style, with the gopuram overpowering the street on which the temple sits. This temple is also a testimonial for the vishwakarmas sthapathis. There are two entrances to the temple marked by the gopuram on either side. The east gopuram is about 40 m high, while the smaller western gopuram faces the sacred tank. The vahanas (Sanskrit for "vehicles") at the temple include the bull, Adhikaranandi, elephant, bandicoot, peacock, goat and parrot, while a golden chariot is a recent addition. Statues of the god and the goddess are seated on a vahana or chariot which is brought in a procession around the temple while the temple band plays music. Devotees gather around the vahanas and consider it a privilege to pull / lift the God and the Goddess on the vahana. There is also a peacock and a peahen caged inside the temple, to symbolize the tradition that Karpagambal had come in the form of peahen to plead to Kapaleeshwarar. During the Tamil month of Panguni, the traditional brahmotsavam (annual festival) takes place when the entire neighborhood comes alive with a mela (carnival)-like atmosphere. Since this month corresponds to the mid-March to mid-April duration, the Kapaleeshwarar temple celebrates the nine day-long as Panguni Peruvizha (Spring festival). The festival starts with Dwajarohanam (flag hoisting), includes the therotsavam, (Tamil, ther, "car/chariot"; utsavam, "festival"), Arupathimoovar festival and concludes with the Tirukkalyanam (Marriage of Kapaleeswarar & Karpagambal). In Brahmotsavam, the idols of Kapaleeshwarar and Karpagambal are decorated with clothes and jewels, are mounted on a vahana, and then taken around the temple and its water tank in a pradakshinam (a clockwise path when seen from above). This is repeated with different vahanas over the next nine days. The more important of the individual pradakshinams are the Athigara Nandhi on the third day, the Rishaba Vahanam on the midnight of the fifth day, the ther (about 13 meters in height and pulled by people) on the seventh morning, and the Arupathimoovar festival on the eighth day. The Arupathimoovar festival is the most important procession. It is named after the sixty-three Nayanmars who have attained salvation by their love & devotion to the all-compassionate Lord Shiva. All sixty-three Nayanmar idols follow the Kapaleeshwarar idol on this procession. During the car festival, Kapaleeshwarar is depicted holding a bow while seated on a throne, with his wife Karpagambal alongside.Brahma is depicted riding the ther. The chariot is decorated with flowers and statues, and there are huge gatherings of devotees to pull the ther. The car festival of 1968 is documented in the documentary film Phantom India by Louis Malle.