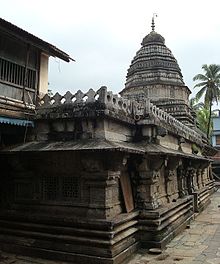 The Mahabaleshwar Temple, Gokarna is a 4th-century CE Hindu temple located in Gokarna, Uttara Kannada district, Karnataka state, India which is built in the classical Dravidian architectural style. It is a site of religious pilgrimage. The temple faces the Gokarna beach on the Arabian Sea in which Hindu pilgrims cleanse before visiting the temple for worship. The temple is considered as holy as the Shiva temple at Varanasi or Kāśi (Kashi) in North India on the banks of the Ganges River. Hence, the Mahabaleshwar temple, Gokarna is known as the Dakshin Kasi ("Kasi of the south"). The temple deifies the Pranalinga ("the reality of God which can be captured by the mind") also called Atmalinga or Shiva Linga[3] In legend, it is said that the deity of the temple will bestow immense blessings to devotees, even to those who only glimpse it. Currently the administrative charge of the temple is with an Overseeing Committee under the Chairmanship of Justice BN Srikrishna, a Retired Justice of the Hon'ble Supreme Court of India. The temple is located on the shores of Arabian Sea on the west coast of India, near the city of Karwar. It is set in a lush, green environment in the holy town of Gokarna (also spelt "Gokarn") in Uttara Kannada (or North Kannada district). Gokarna lies between the Gangavalli and Aganashini rivers. The Shivaratri festival, the observance of the union of Lord Shiva and Goddess Parvati is celebrated in Gokarna in February, when a very large number of pilgrims visit the shrine. During the festival, a Rath Yatra (a procession in a large wooden chariot) is held. Images of Shiva and other deities are installed in a chariot which is ceremoniously pulled through the town by the devotees, accompanied by drum bands. The Ratha Yatra starts from the Shri Maha Ganapati temple at the terminus of the main market street, also known as "Car Street".