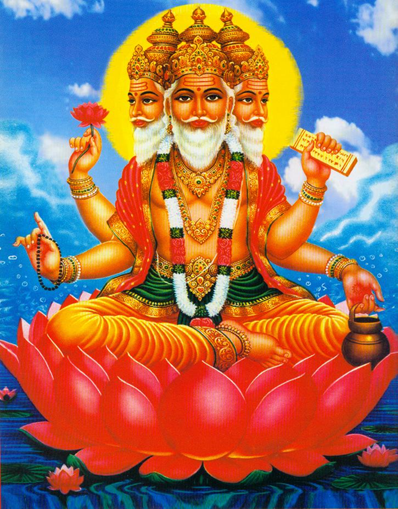 Brahma is one of the principal deities of Hinduism, though his importance has declined in recent centuries. He is also referred to as Svayambhu and is associated with creation, knowledge and Vedas.
Brahma is frequently identified with the Vedic god Prajapati. During the post-Vedic period, Brahma was a prominent deity and his cult existed; however, by the 7th century, he was frequently attacked and lost his significance. He was also overshadowed by other major deities like Vishnu, Shiva and Devi. Along with other such Hindu deities, Brahma is sometimes viewed as a form (saguna) of the otherwise formless (nirguna) brahman, the ultimate metaphysical reality in Vedantic Hinduism.
Brahma is referred to as "The Creator" within the Trimurti, the trinity of supreme Hindu gods that also includes Vishnu, the preserver, and Shiva, the destroyer. Brahma is prominently mentioned in creation legends, though there are many varying versions. In some Puranas, he created himself in a golden egg known as Hiranyagarbha. According to Vaishnava accounts of creation, Brahma was born in a lotus, emerging from the navel of Vishnu. The Shaivism sects believe that he is born from Shiva or his aspects, while the goddess centric Shaktism states that Devi created the universe, including Brahma.
Brahma is commonly depicted as a red or golden complexioned bearded man, with four heads and hands. His four heads represent the four Vedas and are pointed to the four cardinal directions. He is seated on a lotus and his vahana (mount) is a hamsa (swan, goose or crane). Goddess Saraswati is generally mentioned as Brahma's wife and she represents his creative energy (shakti) as well as the knowledge which he possesses. According to the scriptures, Brahma created his children from his mind and thus, they were referred to as Manasputra.
In present-age Hinduism, Brahma does not enjoy popular worship and has lesser importance than the other members of the Trimurti. Brahma is revered in ancient texts, yet rarely worshiped as a primary deity in India. Very few temples dedicated to him exist in India, the most famous being the Brahma Temple, Pushkar in Rajasthan. Brahma temples are found outside of India, such as at the Erawan Shrine in Bangkok.
The origins of the term brahma are uncertain, in part because several related words are found in the Vedic literature, such as brahman for the 'Ultimate Reality' and brāhmaṇa for 'priest'. A distinction between the spiritual concept of brahman and the deity Brahmā is that the former is a genderless abstract metaphysical concept in Hinduism while the latter is one of the many masculine gods in Hindu tradition. The spiritual concept of brahman is far older and some scholars suggest that the deity Brahma may have emerged as a personification and visible icon of the impersonal universal principle brahman. The existence of a distinct deity named Brahma is evidenced in late Vedic texts.
Brahma is the creator of the universe and of all beings, as depicted in the Hindu cosmology. The Vedas, the oldest and the holiest of Hindu scriptures, are attributed to Brahma, and thus Brahma is regarded as the father of dharma. He is not to be confused with Brahman which is a general term for the Supreme Being or Almighty God. Although Brahma is one of the Trinity, his popularity is no match to that of Vishnu and Shiva. Brahma is to be found to exist more in scriptures than in homes and temples. In fact, it is hard to find a temple dedicated to Brahma. One such temple is located in Pushkar in Rajasthan.
In the Hindu pantheon, Brahma is commonly represented as having four heads, four arms, and red skin. Unlike all the other Hindu gods, Brahma carries no weapon in his hands. He holds a water-pot, a spoon, a book of prayers or the Vedas, a rosary and sometimes a lotus. He sits on a lotus in the lotus pose and moves around on a white swan, possessing the magical ability to separate milk from a mixture of water and milk. Brahma is often depicted as having long, white beard, with each of his heads reciting the four Vedas.
Brahma presides over 'Brahmaloka,' a universe that contains all the splendors of the earth and all other worlds. In Hindu cosmology, the universe exists for a single day called the ‘Brahmakalpa’. This day is equivalent to four billion earth years, at the end of which the whole universe gets dissolved. This process is called ‘pralaya’, which repeats for such 100 years, a period that represents Brahma's lifespan. After Brahma's "death", it is necessary that another 100 of his years pass until he is reborn and the whole creation begins anew.
Ralph Waldo Emerson (1803-1882) wrote a poem called "Brahma" that was published in the Atlantic in 1857, which shows many ideas from Emerson's reading of Hindu scriptures and philosophy. He interpreted Brahma as "unchanging reality" in contrast to Maya, "the changing, illusory world of appearance." Brahma is infinite, serene, invisible, imperishable, immutable, formless, one and eternal, said Arthur Christy (1899 – 1946), the American author and critic.

Related Temples
Search and book vazhipadus at your favorite temples...
View All
Attention Presidents/
Secretaries Of Temple Administrations:
If you would like to onboard your temple on iprarthana website:
Top