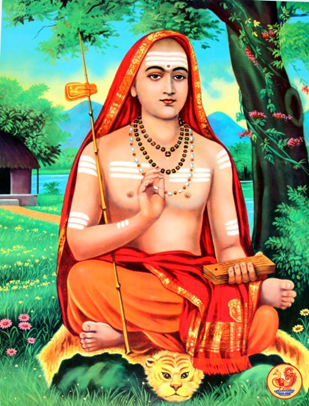 Adi Shankara (also called Shankaracharya; 788–820) was an Indian religious philosopher. He was born in Kalady, in the Indian state of Kerala. ... Shankara wrote many books in Sanskrit. He founded a branch of Hindu thoughts named Advaita.

Shankara, as he was known before becoming a great teacher, was born into a poor Brahmin family at Kaladi, present day Kerala, India. His parents, Sivaguru and Aryamba, offered their prayers to Lord Shiva, requesting the deity to bless them with a child. Their prayers were soon answered in the form of a baby boy. A few theories suggest that Aryamba had a dream in which Lord Shiva himself promised her that he would be taking birth as her child. Hence, many consider Shankara as a reincarnation of Shiva. Shankara was educated by his mother as he lost his father when he was just seven. Aryamba played a key role in teaching Vedas and Upanishads to a young Shankara.
Under Govinda Bhagavatpada’s guidance, Shankara studied ‘Gaudapadiya Karika’, ‘Brahmasutra’, Vedas, and Upanishads. To his teacher’s amazement, Shankara was able to master almost all the ancient scripts in a short time. He even started writing commentaries on major religious scripts. Once he had a clear understanding of the ancient Hindu scripts, he started traveling across India, propagating ‘Advaita Vedanta’ and ‘Dashanami Sampradaya.’ During the course of his journey, Shankara’s teachings were challenged by many philosophers and thinkers. He was even involved in a number of debates pertaining to Hinduism and its beliefs, but Shankara managed to astound all his doubters with his intelligence and clarity. He then went about propagating his ideas and was soon accepted as a guru by many.
Adi Shankaracharya is renowned for his spectacular commentaries on ancient texts. His review of ‘Brahma Sutra’ is known as ‘Brahmasutrabhasya’, and it is the oldest surviving commentary on ‘Brahma Sutra’. It is also considered as his best work. He also wrote commentaries on Bhagavad Gita, and the ten principal Upanishads. Adi Shankaracharya is also well-known for his ‘stotras’ (poems). He composed many poems, praising gods and goddesses. The ones dedicated to Krishna and Shiva are considered most important among his ‘stotras’. He also composed the famous ‘Upadesasahasri’ which literally translates to ‘a thousand teachings.’ ‘Upadesasahasri’ is one of his most important philosophical works.
Adi Shankaracharya’s philosophy was simple and straightforward. He advocated the existence of the soul and the Supreme Soul. He believed that the Supreme Soul alone is real and unchanging while the soul is a changing entity and that it does not have absolute existence.
Adi Shankaracharya became a key figure in restoring belief in the Vedas and Upanishads. Smartism, a subsect of Hinduism, was formed based on his teachings. He is also credited with making Hindus understand the existence of one Supreme Being. He explained that all other deities are just different forms of the Supreme Being. The monasteries founded by Shankaracharya had a great influence in reforming Hinduism.
Mathas:-

Adi Shankaracharya founded four monasteries (mathas) - one each at the four cardinal points in India. Here are the four mathas founded by Shankara:
• Sringeri Sharada Peetham – This was the first monastery founded by Adi Shankaracharya. It is located at the southern part of India, along the banks of Tunga. Sureshvara was made the head of this matha as Shankaracharya moved on to establish other mathas. Sringeri Sharada Peetham advocates ‘Aham Brahmasmi’ (I am Brahman) and was formed on the basis of Yajur Veda.
• Dvaraka Pitha - Dvaraka Pitha is located in the western part of India. Hasta Malaka, who came to be known as Hastamalakacharya, was made the head of this matha. Dvaraka Pitha advocates ‘Tattvamasi’ (That thou art) and was formed on the basis of Sama Veda.
• Jyotirmatha Peetham – This monastery is located in the northern part of India. Totakacharya was made the head of this matha which advocates ‘Ayamatma Brahma’ (This Atman is Brahman). Jyotirmatha Peetham was formed on the basis of Atharva Veda.
• Govardhana matha - Govardhana matha is located at the eastern part of India. The matha is a part of the famous Jagannath temple. Padmapada was made the head of this monastery which advocates ‘Prajnanam Brahma’ (Consciousness is Brahman). It was formed on the basis of Rig Veda.
At the age of 32, Adi Shankaracharya retired to the Himalayas and is believed to have entered a cave near Kedarnath. He was never seen again and the cave that he entered is considered as his final resting place.

AALAKKATTU SREE MUTHAPPAN MADAPPURA
KANNUR, KERALA
Book Now
View All
Attention Presidents/
Secretaries Of Temple Administrations:
If you would like to onboard your temple on iprarthana website:
Top