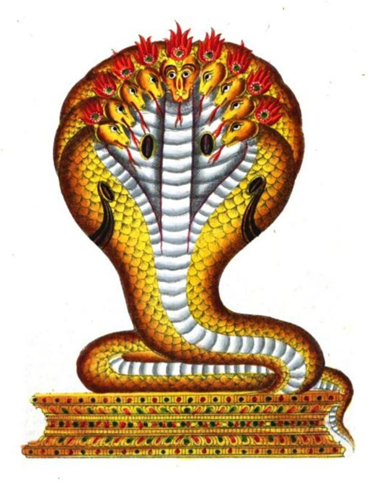 Nāgarāja "King of the nāga" are the figures that appears in Buddhist and Hindu mythology. These are the kings of the various races of Nagas.
There are many Nagarajas mentioned throughout various Buddhist texts. There are four major royal races of Nagarajas in Buddhism as the Virupakkhas, the Erapathas, the Chabyaputtas and the Kanhagotamakas. Nāga Kings appears in the audience for many of Gautama Buddha's sermons in Buddhist scriptures. The duties of the Nāga Kings included leading the nāgas in protecting the Buddha, other enlightened beings, as well as protecting the Buddha Sasana.
Some of the most notable Nagarajas occuring in Buddhist scriptures are Virupaksa, Mucalinda, Dhrtarastra, Taksak, Vasuki, Nanda, Upananda, Sagara, Balavan, Anavatapta and Utpala.
Virūpākṣa (Sanskrit; Pali: Virūpakkha) is a major deity in Buddhism. He is one of the Four Heavenly Kings and a dharmapala. He lives on the western part of Sumeru. He is leader of the nāgas.[
It is said that four weeks after Gautama Buddha began meditating under the Bodhi Tree, the heavens darkened for seven days, and a prodigious rain descended. However, the mighty King of Serpents, Mucalinda, came from beneath the earth and protected with his hood the one who is the source of all protection. The subject of Buddha meditating under the protection of Mucalinda, also known as Naga Prok attitude is very common in Southeast Asian Buddhist art.
Buddhist literature features a Nāga King named Dhṛtarāṣṭra (Sanskrit; Pali: Dhataraṭṭha). He was the father of Gautama Buddha in a past life when the latter was a bodhisattva named Bhūridatta. He is mentioned in several Buddhist texts such as the Bhūridatta Jātaka, the Mahāmāyūrī Vidyārājñī Sūtra and the Mahāmegha Sūtra.
Hindu texts refer to three main beings by this title: Shesha, Takshaka and Vasuki. All of them are the children of rishi Kashyapa and Kadru.
Shesha, also sometimes known as Ananta, is the eldest brother: a devotee of Vishnu, he represents the friendly aspect of snakes, as they save food from rodents. Vishnu is always in continuous meditation (Yoganidra) with Ananta forming a bed for him; thus, this posture is called Ananta-Sayana.
Vāsuki is a serpent king in Buddhism and Hinduism. He is a devotee of Shiva, who always wears the nāga around his neck. Vasuki also has a sister named Manasa.
Takshaka is a Nagaraja in Buddhism and Hinduism. In Buddhist texts, their royal race is mentioned as the most venomous snakes and the only snakes which can fly. They represents the dangerous aspect of snakes, as they are feared because of their venom.
An ancient temple of Nagraj or snake god Vasuki is in Gujarat's surendranagar district's "Thangadh" town. Thangadh's land is also known as land of snake. People do worship Vasuki nag as the rustic god of Thangadh.
At Nagercoil in Kanniyakumari district of Tamil Nadu, a temple dedicated to Nagaraja exists.
There is another famous temple named Mannarasala in Alleppey district of Kerala. The deity in this temple embodies both Anantha and Vasuki into one. A temple devoted to nagraja exists in kaippattoor of Ernakulam district in Kerala, India. It is known as thekkanattil nagaraja kshetram.
A temple devoted to Nagaraja exists in Poojappura of Thiruvananthapuram District in Kerala, India. It is known as Poojappura Nagarukavu Temple. The uniqueness of this temple is that here the family of the Nagaraja including Nagaramma (Queen of Naga) and Nagakanya (Princess of the Naga kingdom) is placed inside a single temple.
Also at Thiruvananthapuram is an ancient abode of Serpent Wisdom known as Thuppanathu Kavu, located at Vazhamuttam. The three serpent deities evoked in this ancient temple are Nagaraja Vasuki (relating to Lord Shiva), Naga Yakshi (Serpent Queen/ wife of Nagaraja) and Naga Kanyaka. Turmeric powder, Noorum Paalum and Naagaroottu are offered to them. Accompanied by the Naga Gods and Goddesses at Thuppanathu Kavu are the goddess Vanadurga and the goddess Rajarajeswari.
Kukke Subramanya is a Hindu temple located in the village of Subramanya, Karnataka. In this temple Kartikeya is worshipped as Subramanya, lord of all serpents. The epics relate that the divine serpent Vasuki and other serpents found refuge under Subramanya when threatened by Garuda.

Related Temples
Search and book vazhipadus at your favorite temples...
View All
Attention Presidents/
Secretaries Of Temple Administrations:
If you would like to onboard your temple on iprarthana website:
Top