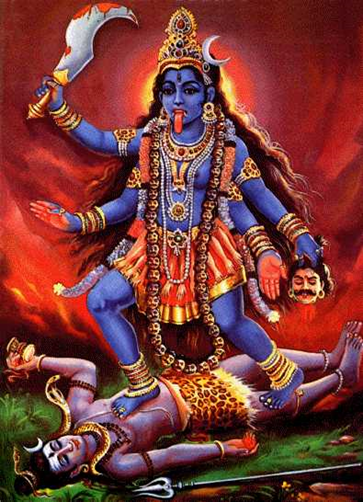 Bhadrakālī (literally "protector Kaali") is a Hindu goddess popular in Southern India. She is one of the fierce forms of the Great Goddess Shakti or Adi Parashakti (also called Durga, Devi, Mahadevi, or Mahamaya) mentioned in the Devi Mahatmyam. Bhadrakali is a popular form of the Great Goddess, worshipped in Kerala as Bhadrakali, Mahakali, Chamunda and Kariam Kali Murti. In Kerala she is seen as the auspicious and fortunate form of Mahakali who protects the good.
This goddess is represented with three eyes, and four, sixteen, or eighteen hands. She carries a number of weapons, with flames flowing from her head, and a small tusk protruding from her mouth. Her worship is also associated with the Tantric tradition of the Matrikas as well as the tradition of the ten Mahavidyas and falls under the broader umbrella of Shaktism. Sarkara, Kodungalloor, Parumala Sree Valiya Panayanaarkkavu Temple, Attukal, Chettikulangara, Thirumandhamkunnu and Chottanikkara are famous Bhadrakali temples in Kerala. Mandaikadu, Kollencode are famous temples in Tamil Nadu. Bhadrakali temple in Warangal is famous.
Bhadrakali is primarily worshipped in 4 forms: Darukajit (as the killer of the demon Darika), Dakshajit (as the killer of Daksha), Rurujit (as the slayer of the demon Ruru) and as Mahishajit (as She who killed Mahishasura).
In Sanskrit, Bhadra means Decent. A major religious interpretation of this name is that Bhadra comes from 'Bha' and 'dra', The letter 'Bha' means 'delusion' or 'Maya'and 'dra' is used as a superlative i.e. meaning 'the most/the greatest etc.' which makes the meaning of Bhadra as Maha Maya. The Sanskrit word 'Bhadra Kaali' therefore can be translated to Hindi as 'Mahamaya Kaali'.
In Kerala, where the worship of Bhadrakali is prevalent even today, she is worshipped most commonly as "Darikajit," the slayer of Darika, based on a story that originated in the Markandeya Purana, and is called the "Bhadrakali Mahatmyam" or "Darika-vadham".
The asura Darika was said to have a very chaste wife, Manodari, who had in her possession a special mantra that would keep her husband invincible, and thus her marriage forever safe. Darika used his newfound invincibility to torment the lokas and usurp the kingdom of the Devas. When Lord Shiva came to know about the misdeeds of demon Darika, he opened his fiery third eye and the massive ferocious form of Bhadrakali emerged (In this incarnation, the Goddess was not his wife, but her daughter.) Shiva ordered Bhadrakali to destroy Darika, with a Vetala as her vehicle.
However the Goddess found it impossible to kill the demon as he was ever in the protection of his wife's mantra chanting. The Goddess split her form into that of her fierce warrior self that continued to engage in combat and that of a common woman. The Goddess went to Manodari, claiming to be the wife of a soldier who was fighting for Darika in his army in the losing battle. With this, Manodari broke her chanting to console the worried woman, breaking Darika's broke invincibility shield. Kali immediately disappeared from Manodari's presence while on the battlefield she had already managed to injure Darika.
As Darika lay at her feet, about to be killed, he was said to have appealed to her motherly nature as a last resort, with faux praises and prayers. But the Devas gathered there began to sing praises to the Goddess (such as the mantra "Kante Kalatmaje Kaali, Kante Kali Namostute"), thus reminding the Goddess of the atrocities Darika had committed that caused her birth in the first place. Turning a blind eye to Darika's faux innocence, Bhadrakali severed his head and held it aloft in her left hand as she danced around in the battlefield.
But her anger would not succumb and so the Devas invoked Lord Shiva to intervene and calm Kali down, as when in anger Kali had the tendency to reduce the universe into nothingness. Shiva lay in her path as a crying baby and this time (Gandakarna), Kali's true motherliness was awakened. A now calm Kali expressed her wish to stay at the spot and protect the local people till the end of time. The spot where she remained is said to be the Kodungallur Bhagavathy Temple. Bhadrakali at Kodungallur still remains one of her 3 most auspicious temples in Kerala, along with Thirumandhamkunnu Temple and Parumala Valiya Panayannarkavu Devi Temple. It is also listed as one of the 13 'kaavu' temples of Kali and as one of the main 64 Bhadrakali temples in Kerala.
Another version of the Bhadrakali story is from the Devi Mahatmyam of the Markandeya Purana, during the battle between Raktabija and Goddess Kaushiki (Durga). Kali was born from the wrath of Goddess Kaushiki, from her forehead. She slew Chanda & Munda and earned the epithet 'Chamundi'. She also slayed the demon Raktabija, which is her most famous feat. This Chamundi-Kali form is said to be the leader of the Sapta-Matrikas and is the most popular form of the Goddess in Northern India.
Another popular story on Bhadrakali is associated with Daksha and his yajna, according to the Shiva Purana, Vayu Purana and the Mahabharata. Goddess Bhadrakali was born from the matted locks of Shiva's hair. He ordered her to free Veerabhadra who was imprisoned by Lord Vishnu, as the latter was protecting Daksha. She succeeds and is later heard of as assisting in Daksha's assassination, and hence earned the title 'Dakshajit'.
According to Tantra Rahasya, the feminine form of the divine (Devi) arose from the North (Uttaramnaya) face (Amnayas) of Shiva, which is blue in color and with three eyes, as Dakshinakalika, Mahakali, Guhyakah, Smashanakalika, Bhadrakali, Ekajata, Ugratara, Taritni, Katyayani, Chhinnamasta, Nilasarasvati, Durga, Jayadurga, Navadurga, Vashuli, Dhumavati, Vishalakshi, Gauri, Bagalamukhi, Pratyangira, Matangi, and Mahishamardini. 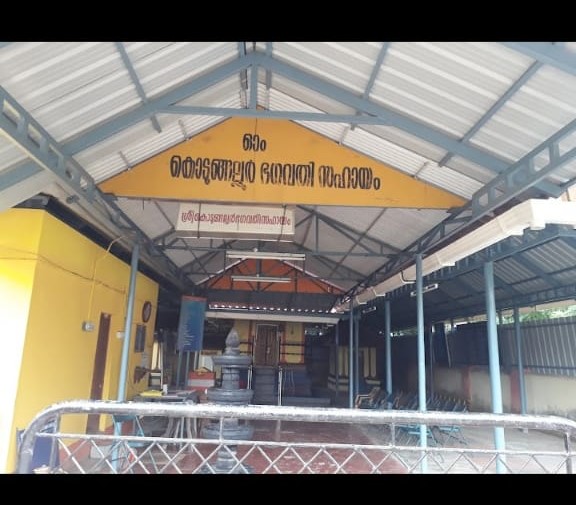 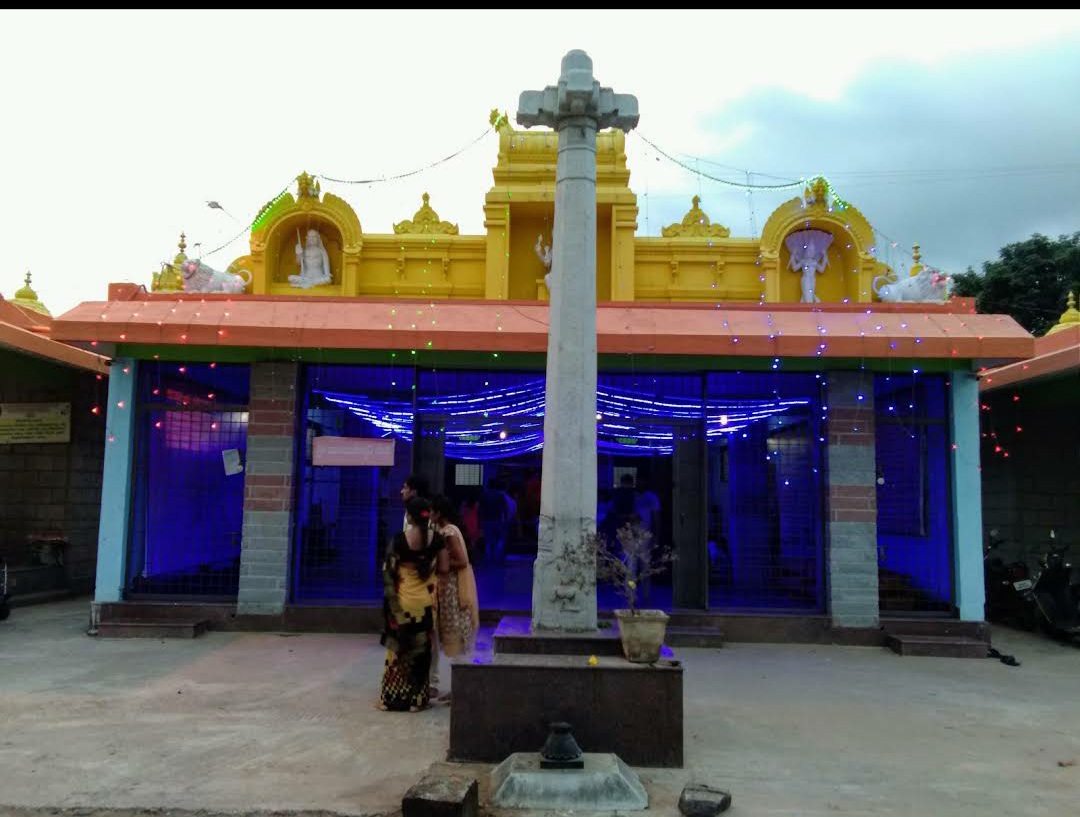 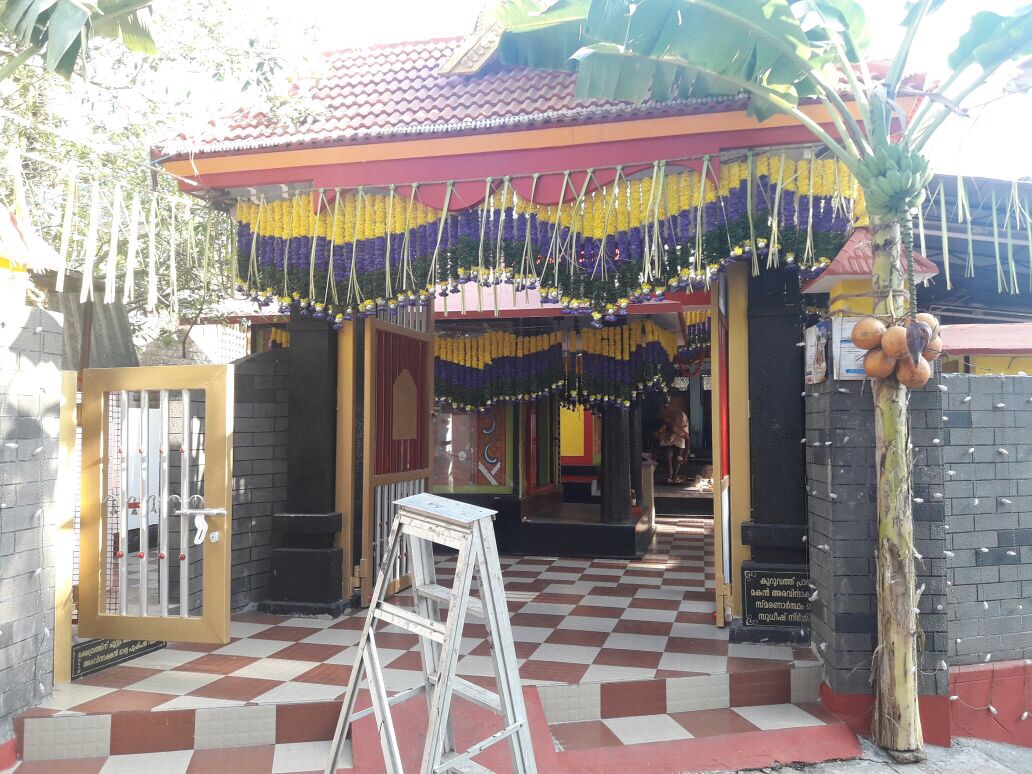 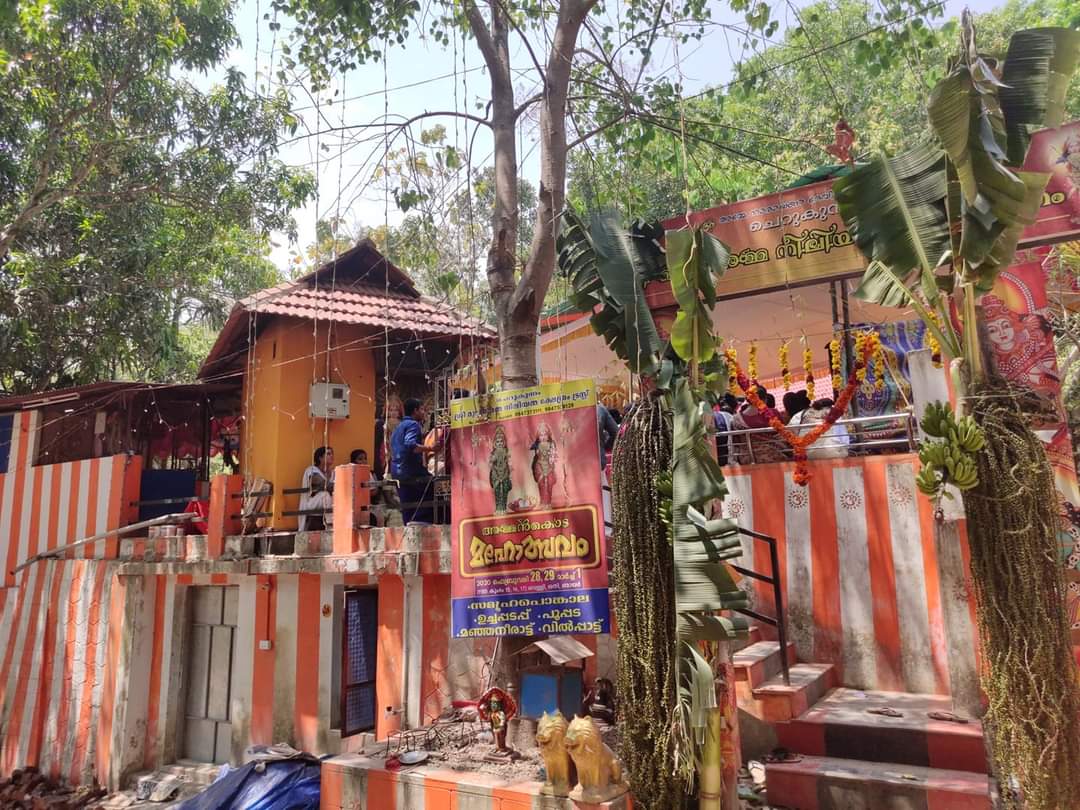