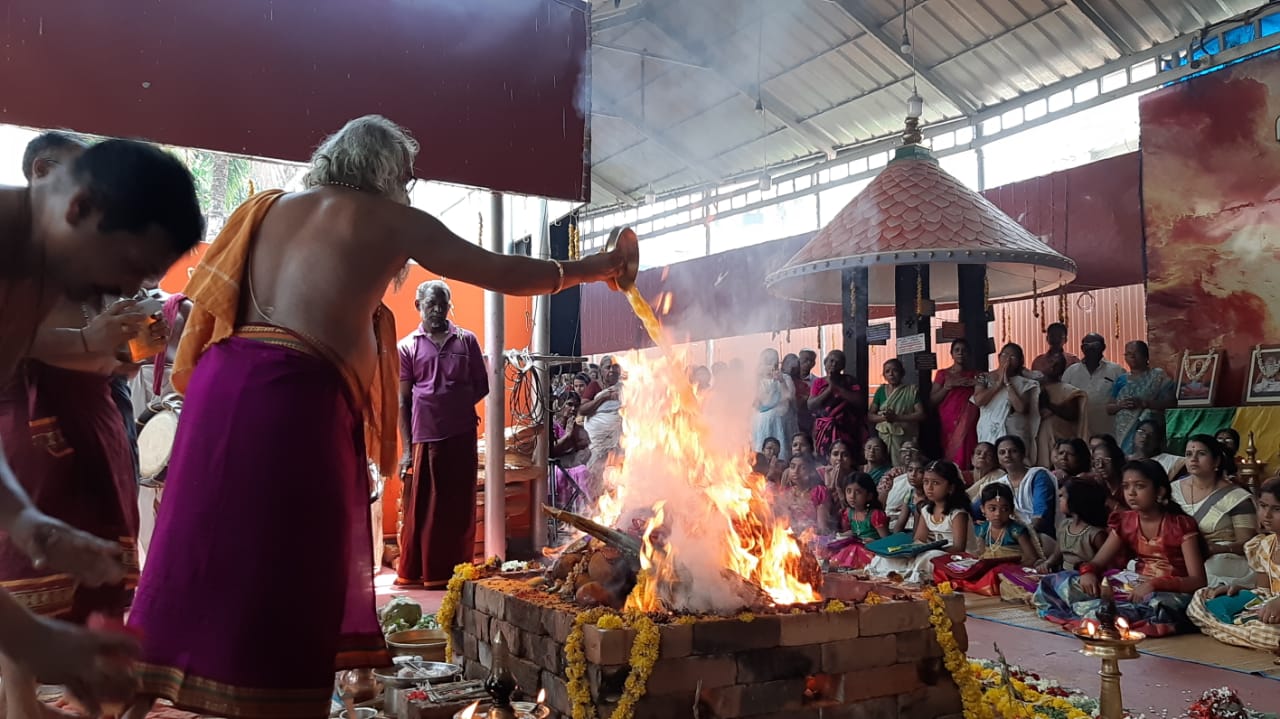 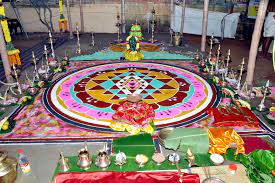 In India, Kerala abounds in natural beauty, temples, monasteries ashrams, saints, diverse religious beliefs in harmony, cultural heritage, piety, piece and prosperity – and thus got the name God’s own country! Among the temples in Kerala State, Kollam Kadappakkada Vadakkekunnathu Sree Rajarajeswari Devi Temple protects and adorns the state by performing perfect poojas attributed to sixty four crores of deities of the fourteen worlds, serving Parasakthi, Sree Rajarajasweri Devi, the embodiment of Brahma, Vishnu and Siva, the supreme power of the Brahmanda!. History records that in primitive time the temple premises was a Kavu (Grove) and in the midst of the kavu there was a koovala tree (Crataeva Religiosa) which was embraced by a mulla vally (Jasmine climber) with sweet smelling umbrella jasmine flowers surpassing all seasonsThe ancestors of Vadakkekunnathu Family who belonged to Kailasa Gothra worshiped this moolaprakrthi (the fundamental nature) as Muthappan (Siva) and Parvathi (Sakthi) – Sivassakthiaikyaroopini by lighting ceremonial lamp under this tree on a pedestal for centuries and in course of time the members of the family, setting aside the place of worship for carrying out the poojas for the betterment of the neighbourhood started living in and around Kerala and in different parts of India. Many attempts had been made to construct a temple and once an unfinished temple was constructed which stood for decades in dilapidated condition and in the year 2002 some of the family members got together and constructed the sanctum sanctorum and the other shrines and edifices by seating Goddess Rajarajeswari and the other deities now in view.It was on a sunny day the consecration of the idol of Sreematha was held followed by successive poojas and pageants in which thousands of women devotees participated carrying thalapolis (decorated platters having lamps) and chanting Sreematha’s hymns. Suddenly the clear sky changed and heavy down pour occurred followed by thunder and lightning – a phenomenon which the history has never witnessed save the Mahapralayasakshini, none other than Parashakthi Goddess Sree Rajarajeswari Devi Herself! All the devotees stick to their stand calling Amma aloud and the Great Matha took her abode blessing all ! Since then great poojas, homas, yagas, japas, prayers, temple laws, festivals and gift of food have been being carried out with the grace of the Mother of the world Sree Rajarajeswari Devi.